You most probably have seen boxelder bugs around many times, but if you want to find out more about how to get rid of them, this article is the right one for you. Insects and pests can be quite a problem around a household, so it’s good to understand what attracts and drives each of them, in order to know how to tackle the issue.

When it comes to boxelder bugs, they are a species of insects found in North America that live primarily on boxelder trees (as their name clearly states), but also on maple and ash trees. The adults grow to be 0.49 inches long and feature a coloration that is either black or dark brown. They also have red wing markings on the abdomen.

These insects are pretty easy to identify, but the question of “What can you do about them once they’ve established their presence?” remains. In the following lines we will explore some solutions to prevent an infestation that could lead to more serious issues around your property.

Boxelder bugs tend to become a nuisance during the fall season when they start looking for spots they can use to spend the winter. That’s when they start migrating indoors where they can find insulated cracks and spots that remain warm throughout the season. To do this, they start invading the house in large numbers.

During the fall, when they are still outside, they gather in large numbers and stay on warm rocks, buildings or trees where they can dwell in the warmth of the sun. Once winter approaches, they start moving in large masses that can get very annoying.

Issues they can cause

These insects can definitely become a more significant problem when large groups invade a home. Luckily, they are not known to bite which means that you don’t really have something to worry about in terms of your own safety. On the other hand, they do have the ability to cause a puncture in the skin.

Such a bite can cause a slight irritation as well as produce a red spot, as is the case with almost any other type of bug bite. In certain cases, if the bug is handled roughly or even crushed, it can produce a very unpleasant and strong odor. Another issue would be that boxelder bugs can leave red-orange stains that can lead to fabric discolorations.

The first step you need to take in any kind of situation that involves insects is to prevent their presence. In the case of these bugs, what you need to do is to identify holes in windows and door screens and repair them before the winter comes.

The same goes for all types of exterior entrances, and you can use various substances to seal the cracks, a very common and effective one being a tube of high quality silicone. If the bugs have already entered a building, you shouldn’t try to kill them while they are in the walls, since their bodies can attract other types of pests such as dermestid beetles.

One thing you can do in this case is to use a vacuum cleaner to remove them and provide a temporary relief. If you do this, make sure that the bag you removed from the vacuum cleaner is carefully sealed and taken outside, so that the bugs cannot escape from it and render the entire effort useless.

When working with insecticides or other similar chemicals, you can never be too careful in terms of your own safety. Therefore, make sure that you always wear the appropriate gear to get the job done without running into any risks. The equipment usually consists of heavy-duty gloves, a dust mask, as well as protective goggles.

You also need to protect your skin, so you will need to wear long sleeves and pants. Moreover, any type of contact between the skin, eyes, or respiratory system and the chemicals needs to be avoided at all cost. Once you’ve chosen the product that you are going to use, carefully read the label and see what other specific safety instructions are mentioned there.

Even if a certain product is not necessarily harmful to humans, such as diatomaceous earth, ensuring your overall protection is always the best policy. Any chemical substance can somehow irritate your eyes or lungs if you are exposed to it for a longer period. 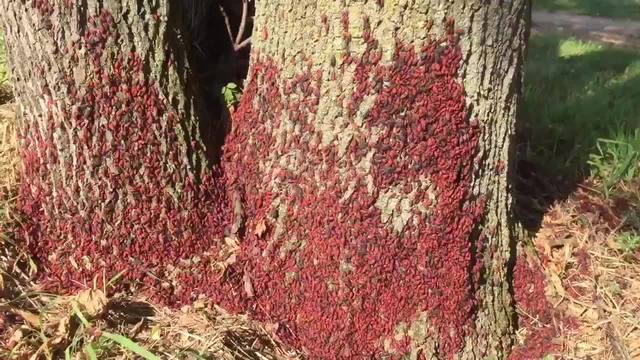 Before using dangerous pesticides you can always opt for a safer treatment first, such as using diatomaceous earth, if you want to treat large colonies of boxelder bugs.

What you need to do is to follow the manufacturer’s instructions and use appropriate tools, such as a hand duster to sprinkle the substance around the base of the tree, whether we’re talking about a boxelder or a maple tree.

Diatomaceous earth is actually non-toxic to pets and humans but it’s effective in killing boxelder bugs, since it contains a fine silica-based powder that affects their exoskeleton. Another option would be to use Borax instead of diatomaceous earth, but this is entirely up to you.

However, do keep in mind that you need to re-apply the same treatment if it rains, since otherwise the bugs will be able to come back.

If the bugs are swarming around the house, then you need to use an actual insecticide. What’s particular about boxelder bugs is that they release a chemical substance in order to attract their brothers and sisters, and this can lead to large colonies forming in the same area.

If you’ve decided to use insecticide, the first step is to make sure that all the safety precautions were taken for the substance to be applied without any risks. Next, simply spray around the area where the bugs are congregating.

You can also create a perimeter around the house by using insecticide in bug-free areas as well. This is actually a smart move if you want to prevent the bugs from getting anywhere near you, just make sure that every time it rains you re-apply the substance, if needed.