A yellow jacket trap can be very useful if you have encountered issues with these creatures. Although wasps do not really attack unless they feel threatened, it is best to keep a safe distance from their nest.

Sometimes, however, that can be rather hard to achieve, if the nest is built under your roof. In the warm and hot seasons, having to live so close to these insects may be a bit stressful. But what happens to wasps in the winter?

Unfortunately, wasps and winter do not seem to go together. Depending on the area where you live, there might be snow, icy winds, or pouring rain – none of these conditions are suitable for flying insects.

If you come to think about it, you do not see any insects flying around in the winter, including wasps. So, where are they? Could they be tucked snugly into a nest and dreaming of spring like so many of us? Do they die? What happens to them?

If wasps had a motto, it would certainly not be survival of the fittest, but the survival of the queen! So, what makes the queen so special? Why is she the only one allowed to live, and the others have to work toward achieving that?

Actually, all members of the wasp colony do everything they can to keep the queen alive, because she will lay new eggs when the weather starts warming up. She is the one that ensures the survival of the species, and that is what makes the queen so important.

For the rest of the colony, winter is quite deadly. The purpose of male wasps is to impregnate the queen, while the role of fertile females is to keep the colony going. Some of the male workers are usually killed by the cold weather, but most starve to death due to the lack of food. The infertile females and the older queens die as fall turns chilly as well.

The Queen Wasp vs. Winter

The queen wasp, on the other hand, looks for a warm place to pass the winter and enters a semi-dormant state. It is only after the weather starts warming that she begins looking for a new place to lay her eggs and start a new colony.

However, if a queen manages to find a good resting place to shelter her in the winter, it does not mean that the danger is gone. The shelters wasps choose, often prove themselves to be deadly.

The holes and crevices in walls are also preferred by predators, usually spiders. The ones that find a hibernating wasp… yes, you guessed – the eight-legged arachnids will eat the unsuspecting wasps.

Spiders are not the only danger queen wasps can face during the winter. Warm weather can also kill them. You read that right! If the temperatures rise for a short period before spring, queens get out from their hibernating state. Unfortunately, they will soon starve to death due to the lack of food.

In case you see a solo wasp in your home, in the winter, it is likely a queen. It is not unusual for them to access houses through cracks and settle down in a quiet corner. You may find one even in the fold of a heavy drape. The idea is that if the queen dies, the future of the colony dies with her.

The Life Cycle of the Wasp – Hibernation

Hibernation, which is also the first stage of a wasp’s life cycle, can start as early as the beginning of September to as late as the end of April. As previously mentioned, the wasp colonies die during the cold season. This does not happen because of the cold, but because of starvation. Only sexually mated queens can get over winter by hibernating.

Under normal circumstances, queens stay asleep until plants start to flower, and they have enough nectar to support them. Overwintering queens can emerge from hibernation when temperatures in the shade reach around 50 degrees Fahrenheit.

Sometimes, it can even happen that an emerging queen might stray into the living quarters of the house. The best thing you can do is to open the window and allow her to escape. You can later seal up the entry point to prevent the issue in the following year.

This is the second stage of a wasp’s life cycle. It can start as early as the beginning of March to as late as the end of May. When queens come out of hibernation, there are so many things she needs to do, and so little time. Not only does she have to find a suitable place to establish the nest, but look for nectar and feed herself as well.

She will lay her first eggs even before the nest is completed in order to bring on her brood as quickly as possible. At this time of the year, all adult wasps feed on sweet liquids such as nectar which are packed with high-energy sugars.

When the eggs hatch into grubs, the queen starts hunting other insects, as the grubs require protein to grow. Unlike the queens we can see on TV shows, a wasp queen almost exhausts herself – she has to feed her brood, collect wood, and continue building the nest. Most of the times, she does not have time to feed herself.

This is when something very interesting takes place. Insect skeletons are made from chitin which is a material made from sugars. When the grubs eat insects caught by the queen, they transform the chitin into free sugars and re-feed to the queen. The grubs are not only helpful because they feed the queen but also because they take over pulping wood for the queen allowing her to take care of other chores. 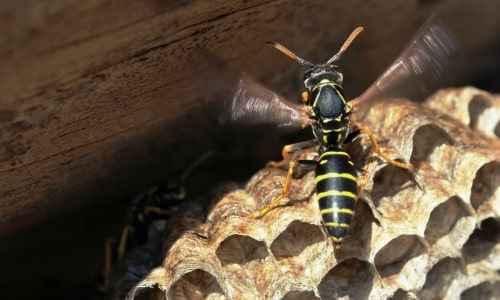 These are the last two stages in a wasp’s life cycle. Colony growth which can start in early April and end late November is a period when enough workers have grown and are able to take over the chores of the nest.

At this point, the queen becomes nest-bound. Her job is now to lay eggs and control the activity of her workers. Each group of workers has precise tasks and the nest will continue to grow until the queen decides that it is time to produce a new sexual progeny which will carry the species forward into the next year.

It is not known what exactly triggers this decision. It is interesting to know that it was noticed that this is a coordinated event with all of the other wasp nests usually countrywide.

So, do wasps die in the winter? The answer is yes and no. The workers and the drones usually die, and not because of the cold weather, but because they starve to death. The queens live by hiding in crevices or wall cracks and hibernating. Sadly, not all of them make it. The ones who are lucky will be starting a new colony at the beginning of spring.