If what you are searching for is detailed information on the endangered chipmunk species, our suggestion is to check it out here. There are over 23 species of chipmunks in the world, most of them being native to North America and Canada. The only different one is the Siberian chipmunk.

Since these small, cute mammals live in deciduous forests and other brushland and woodland, they are quite dependent on this type of environment to reproduce, live and thrive. This does not mean some species did not adapt to living in urban parks or fence lines. However, each particular species has a different adaptability mechanism.

This means that some chipmunk species are more dependent on their actual environment, with less chance of adapting to fast changes, which makes them good candidates for the endangered species list in case their natural environment changes for any given reason. To better understand this phenomenon, let’s take a closer look at how chipmunks live.

Chipmunks are small mammals, belonging to the same family as squirrels, that spend most of their lives on the ground or in deep burrows. Their life expectancy in the wild does not usually exceed 3 years. The average size of a chipmunk varies between 2” and 6” long, with a tail of 3”, and their weight is less than a pound. The largest chipmunks are Eastern chipmunks, with a length of approximately 11” and weighing up to 4.4 ounces.

Chipmunks are omnivores, feeding mostly on foods that can be found on the ground. Their diet varies from insects to mushrooms, seeds, nuts, plant bulbs and roots, and forest fruits. Their menu is quite varied in the warm season, while in winter time they only feed on the seeds and nuts they have stored in their burrows during summer.

Although you may see chipmunks around each other, they are not social animals, keeping to themselves until mating season, which takes place both in spring and summertime, and results in litters as big as eight offsprings. They are mostly active at dusk and dawn and spend most of their day foraging.

Mother chipmunks give birth twice a year to litters of two to eight pups. The newly born babies are naked, blind, pink creatures the size of a jellybean. Their mothers are very protective of them, carefully feeding and cleaning them until they are approximately two months old. That’s when they leave the nest and dig a home of their own, while gathering food for the winter. 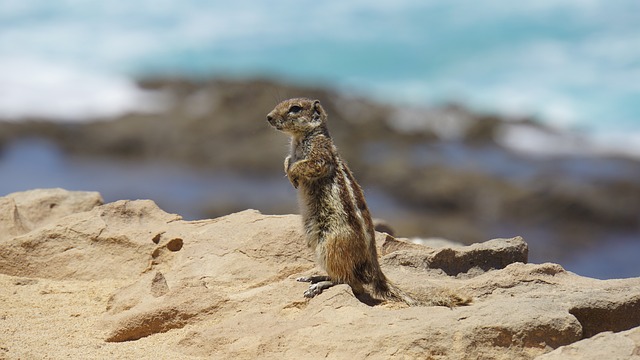 The chipmunk’s habitat is represented by the forests of North America and Canada. Basically, wherever there are trees, you will find chipmunks. They live in complex underground tunnel burrows, using dried leaves to camouflage the burrow entrance and to cushion the nesting area of the most important chambers.

The tunnels can be as long as 10 to 30 feet, consisting of different chambers, such as several food storage chambers, a nesting room, and a waste room. The nesting chamber is situated in the center of the burrow and far away from the entrance, for protection reasons. The burrows also have several exit areas.

Some tunnels are dug downwards, in such a way, that in case any water gets into the burrow, it will go down those tunnels, keeping the food and nesting chambers clean and dry. The food storing chambers are of utmost importance to the tiny chipmunks since that is the food they rely on for the hibernation period.

During the winter time, chipmunks alternate hibernation periods of time with feeding times. While the chipmunk is hibernating, its heart rate will drop significantly from 350 beats per minute to around 5 beats per minute, and their body temperature will also drop a lot, from 94 degrees Fahrenheit to approximately 40 F.

Since chipmunks are native to a very specific area of the world, and given their particular natural environment, they are very sensitive to any environmental change that may occur, either man-made or not. Preserving their natural habitat as best as possible and for as long as possible is key to these cute, tiny animals.

According to the International Union for Conservation of Nature’s (IUCN) Red List, there is one chipmunk endangered species: Palmer’s chipmunks. And one other species, namely Buller’s chipmunk is listed as vulnerable. Let’s take a closer look at why these two species, in particular, are on the IUCN’s Red List, what is their particularity.

Palmer’s chipmunks are only found in a restricted area in the Spring Mountains of Clark County in southern Nevada. Given their restrictive native area, when its habitat started being reduced due to the constant extension of campgrounds, the increasing sprawl of Las Vegas and wood cutting, and feral cats hunting them, their numbers have rapidly decreased.

Buller’s chipmunks are native to Mexico and live in the dry, rocky areas outside of the cities. Since cities started rapidly expanding, the natural habitat of this tiny creature has decreased accordingly. If you put this factor together with the chipmunk’s natural predators in that area, you get a Buller’s chipmunk on the IUCN’s Red List listed as vulnerable.

How can we prevent chipmunks from becoming endangered

Just like with any other wild animals depending on their natural habitat, the best thing we can do for them is to leave them be, while taking a series of actions to keep their natural habitats intact. The first step would be leaving no other trace but our footprints on a moist day when going for a hike in the forest.

Secondly, we must drastically reduce the woodland cutting process. Although for many years wood has been vital to our survival as a species, things have drastically changed over the past decades, as technology has improved a lot. By cutting woodland we are rapidly destroying the natural habitat of many wonderful and much-needed creatures.

Also, we need to be very aware of fire hazards. There are areas of the world where a fire is likely to burst on its own due to extreme weather conditions during the hot season. However, it is our responsibility to be aware of the weather conditions and the surrounding area we are in when handling a fire source in the forest.

There are very few ways to destroy a whole habitat in a matter of hours the way fire does. Uncontrollable vegetation fires during hot summer days are one of the fastest ways to put a species on the endangered list if that species only lives in that area of the world, for instance, the case of Palmer’s chipmunk, that only lives in southern Nevada.

Also, creating a protection program for endangered species has proven to be effective throughout time. Creating a support system with volunteers and specialists working together in order to provide high-quality care and treatment to any endangered chipmunk could be a way to ensure that the species does not go extinct.